You are here: Home / Reviews / Discover a meaningful existence: The Secret Life Of Walter Mitty (review)

Based on cartoonist James Thurber‘s 1939 short story of the same name, Ben Stiller‘s The Secret Life Of Walter Mitty is the second cinematic version to grace the screen, the first being the 1947 version starring Danny Kaye as the story’s protagonist.

First printed in the New Yorker in 1939, the Walter Mitty in Thurber’s short is a married man who daydreams himself a more exciting and meaningful existence to escape his mundane monotonous life.

His alter ego is a lot like how Tom Cruise likes to see himself portrayed on the screen, as an impossibly unbelievable character, larger than life, expert at everything, from war hero to acclaimed surgeon to crack shot assassin on trial for murder, he is the creme de la crÃ¨me, the best the world has to offer, when his reality simply has him shopping for a few bits while he waits for his nagging wife as she takes her weekly visit to the hair dressers.

I cannot at this point comment on the 1947 version, having never seen it, but the 2013 Ben Stiller version was, in my humble opinion, a gem of a film, and has taken Thurber’s literary classic in a fresh although sometimes obvious direction.

Stiller’s Mitty as first glimpsed in the opening scenes, is a single man, a nobody working for the prestigious Life magazine as a negative assets manager, hidden away from the plush and shiny office workers in the darkened bowels of the office building.

He is fond of fellow office worker Cheryl Melhoff (Kristen Wigg), yet he even struggles to acknowledge her even on eHarmony. He is, as described in the final act of the film, like a grey piece of paper, a daydreamer who blends into the background, with nothing noteworthy to say he’s done or seen.

The screenplay by The Pursuit Of Happiness screenwriter Steve Conrad updates the story tremendously well for the modern day, one of the most astute decisions being the setting of Mitty’s career at the offices of Life Magazine, where they are in the middle of an acquisition, and are about to be downsized and re-launched as an online publication. This helps to mirror the theme of the story perfectly, and acts a great back drop for our hopeless protagonist, who really has no life, and indeed the magazines motto itself sums up perfectly the films intended theme.

Stiller, who admittedly has never been one of my favourite comedy actors, gives a great performance here, and with age catching up with the actor, he really does look weary and dishevelled as this small little character. He drops the zanier elements of his usual comedy roles for a much more subtle and favourable act here, his nervousness and awkward mannerisms are masterful.

It’s when he loses adventurer and favoured Life photojournalist Sean O’Connell’s Negative 25, which is claimed to be the quintessential Life cover photo, that Mitty finally makes the lunge from imagining a life of adventure to finally living one for himself. His quest in the footsteps of O’Connell (Sean Penn) may not be the most original storyline, but it is still an enjoyable driving force for the characters own personal journey. In the film, unlike Thurber’s short story, there is the obvious feel good ending that we all saw coming, so the added mystery of the missing negative 25 is not only the drive for Mitty’s character, but also for us as an audience to some degree.

Mitty’s imagination has obviously evolved with the times, and like the films of our generation, many of his daydreams tend to be a quite poor CGI and action packed, especially where he lunges to the rescue of the three legged dog of his love interest or with the superhero battle with the obnoxious bearded overseer of the publications transition, Ted Hendricks, played with skilful arrogance by Adam Scott, all over the possession of a Stretch Armstrong. You can usually tell when these daydreams are about to come into play as the films colour becomes a little more vibrant.

Stiller also does a good job of directing this adventure, with some nice shots throughout, courtesy of cinematographer Stuart Dryburgh (The Piano) and strung together by some notable editing by frequent Stiller collaborator Greg Hayden.

As I said, it’s not completely original, its theme of picking yourself up from a life void of adventure is an extremely common one to say the least, and the techniques of the daydream within the mundane reality are not as effective as say in Scorsese’s King Of Comedy, but Stiller’s Walter Mitty does make good viewing, and its blend of comedy and mystery make it an easily endurable watch and I’m sure its feel good motivational story will appeal to many. 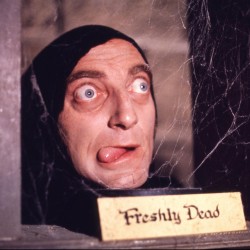